As previously stated on this blog – usually around this time of year in fact- I’m not a big fan of resolutions. Not resolutions themselves, my objection is specific to the New Year’s variety. I never break ’em, ’cause I never make ’em. Yes, folks, it’s really that simple. Can you feel a “nevertheless” coming? I can.

Nevertheless, this year I made a point of reviewing my artwork, just to see what I had accomplished in our Annus Horribilis, 2012. Not as much as I would have hoped; this is normal. Given the circumstances though, the output wasn’t too bad. What did concern me a bit is the way the work is tightening up.

By tightening up, I essentially mean that my collages are becoming more realistic and highly detailed in their quest to become like paintings.  Not that this is necessarily a bad thing, it’s just that I’m not exactly sure that this is the artistic direction in which I want to be moving.  I have struggled with this in my painting, too. Loose is hard for me.

This art-related tightness is an odd habit because I don’t think that I’m an especially uptight person. These days my blood pressure is around 90/60. I suspect that if I were any less uptight I might actually be comatose. If you are reading this blog while you are in a coma and I have offended you with my offhand comment, I apologise.

The other problem with obsessively detailed artwork is that the works take f-o-r-e-v-e-r to finish.

Now, if I were making union scale wages and was paid by the hour, this might actually be an advantage. I once sat in a hospital waiting room and watched a cleaning woman go about her work sooo slooooowly, seemingly counting each step, each movement, always with one eye on the clock, I could only conclude that if she had worked at a normal pace, she probably could have finished her shift in an hour. And then, no doubt, she would have efficiently worked herself  out of a job.

Not for me the life of the wage-slave. No. As it stands though, if I want to maximize my creative output….something’s gotta give.

What are my New Year’s resolutions you ask? Here, I’ll tell you:

Keep it simple, stupid.
I’m not willing to go to no details, so judicious use of detail only.

Have fewer values, but have them really count.
No, I’m not becoming a nihilist; this is an artistic decision. Instead of trying to reproduce the depth and realism of a painting, I’m going back to a value scale of three or four values maximum.

Good design is everything.
Amen to that.

Here is the first completed collage of 2013, and, yes, I am attempting to be true to my resolutions.

So. What do you think? 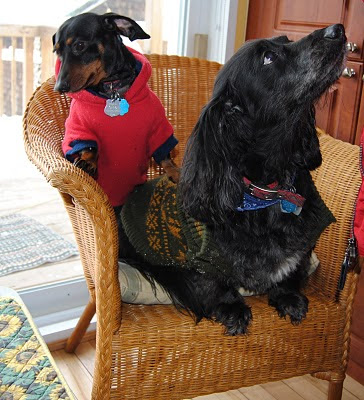 Daisy and Arnold waiting for a treat. Photo by the artist

Daisy, a miniature Dachshund, and Arnold, a Dachshund cross, are the much loved fur children of Margot and Tommy MacKinnon. The MacKinnons kindly submitted to my weird request to photograph their dogs wearing their doggie sweaters with a view to including Daisy and Arnold in my Well Dressed Dogs collage series.

Daisy and Arnold are something of a study in opposites. Daisy, the smaller of the two, is nevertheless the louder and more assertive- definitely a wild, feisty female. 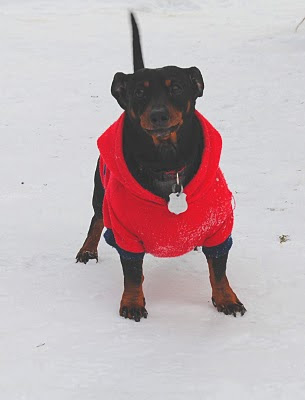 Daisy standing her ground. Photo by the artist.

Arnold, on the other hand, has more of a laid back vibe going for him. He is lovably goofy (but polite) and will do pretty much anything for food. 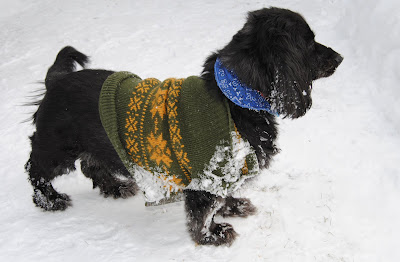 Arnold, what are you looking at? Photo by the artist.
We had a good photo shoot on a nice mid-winter day. Outside first, but the space of the yard was a little too distracting for the dogs, so we went inside. In my mind’s eye I had imagined making a collage of the pair of dogs together on a chair. This was a little more difficult to arrange than I had anticipated: two dogs with two very different personalities and two different attention spans where the promise of a cookie is concerned. Arnold might have sat nicely for me all day. And Daisy? Well, forget about that idea.

Eventually I settled on the design for two separate collage portraits (both keeping the chair idea) which I hope revealed a little bit of each dogs personality. The preparatory drawing for Arnold is below: 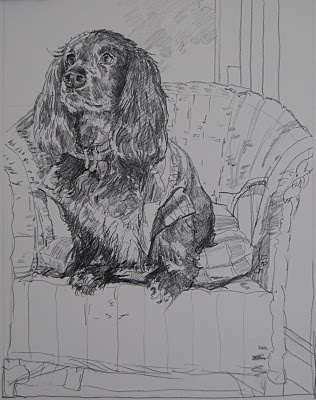 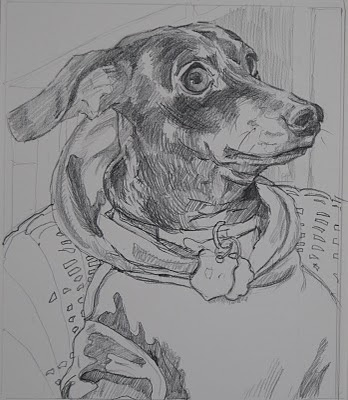 Happily, I was able to get the Daisy collage finished. And here she is: 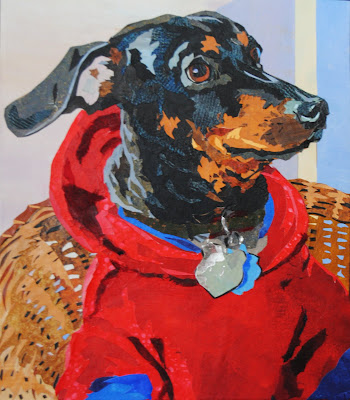 If you would like to see the step by step progression of this collage, please check out my Facebook fan page. Photos are posted there.

My first collage of 2011, and the second dog collage in what I hope will be a series of Dogs in Coats, is finished. The subject of this collage is Gus, a pug who belongs to a friend. Here he is below. 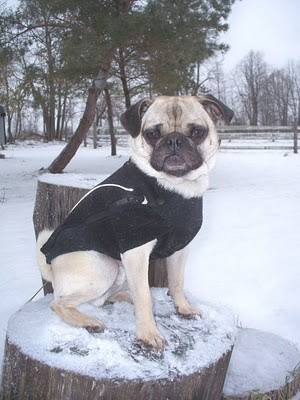 Cute little fellow, isn’t he? And also strangely noble. Big dogs often look goofy, but small dogs have a way of exuding self importance: they really don’t seem to understand the whole size-thing. I guess that’s just part of what makes little dogs so endearing.

As you can see, the photo of Gus shows him in a black coat. Black is not an especially easy colour to work with when making art. As colours go, plain black looks flat and dead and really dominates the composition. So, the black was out. I could also see that for design purposes the stumps would be problematic. As much I liked the original picture, clearly some changes would be in order.

Sorting out the background and removing the stumps wasn’t much of an issue. But the colour of the doggy coat? Well, would it be Red Gus? 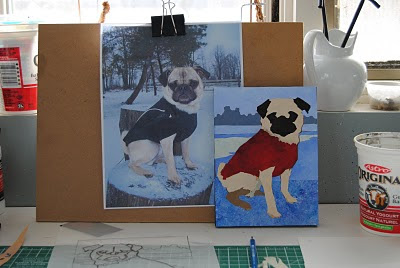 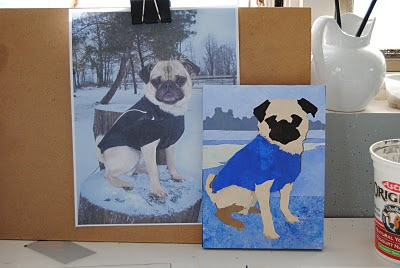 After pondering this dilemma for a while, I remembered that I have a collection of silk neckties in the craziest colours and patterns. Finally, a solution presented itself. 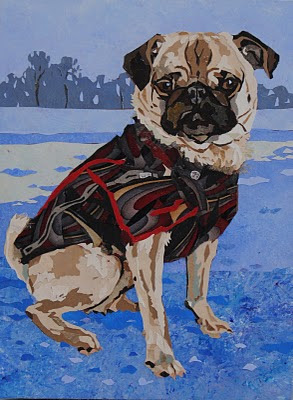 Gus– 8×6 painted paper and fabric collage on panel ©2011 Alyson Champ
Here is Gus in his new sport coat made from a silk necktie dating from the early eighties. It’s what all the fashionable lap dogs are wearing this season. 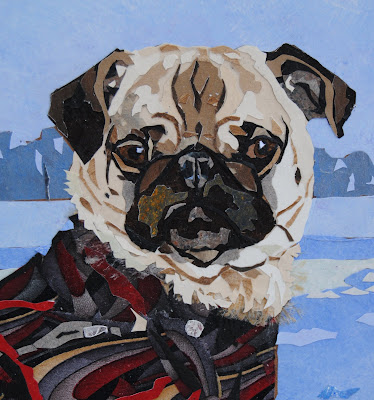 So You Say You Want a Resolution?

I don’t normally do the New Year’s Resolutions thing. Tackling bad habits it has taken years to acquire, and thereby attempting to remake one’s life in a short list just because it’s January, smells like a set up for failure. I resolve instead to choose resolutions that are do-able, things I might be inclined by nature to do anyway, but just haven’t gotten around to doing yet. I hereby resolve to:

Use the word brachycephalic more frequently. English is chock full of fabulous words. Bamboozle is a beauty, as is mukluk*. Just saying mukluk aloud is guaranteed to lift one’s mood. You doubt me? Go ahead and try it.

See, I told you.
Just recently I started making a series of collages featuring dogs in sweaters or doggy coats. Why? Well, as with the word mukluk, a dog wearing a sweater is so inherently ridiculous that seeing a canine so attired makes me smile. What could possibly be better than a dog in a sweater**, you might ask? Why, a brachycephalic dog in a sweater, of course! When I saw a friend’s photo of her pug in his little coat, I could not resist. Say hello to “Gus”, everyone. Isn’t he handsome? 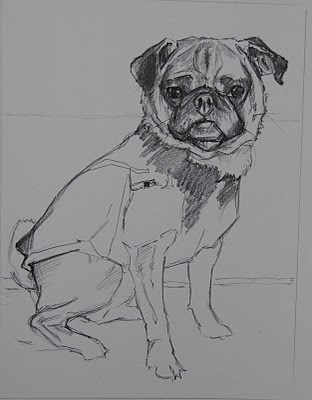 Pencil sketch of Gus
(Oh, and incidentally that’s two brachycephalics – no three- in one post! Bazinga!)

Quit Slacking Off and Actually Get Some Work Done. I went into the studio to work today for the first time in a couple of weeks and it felt pretty good. I was a little slow getting started, but did manage to get some drawing done and to get a panel prepared for the new collage of Gus. However, my studio assistant, Tabitha, was more than an hour late. During the Christmas break, she got into the habit of sleeping in a rocker by the woodstove – guess she forgot it was Monday. That’s coming off your paycheck, cat. 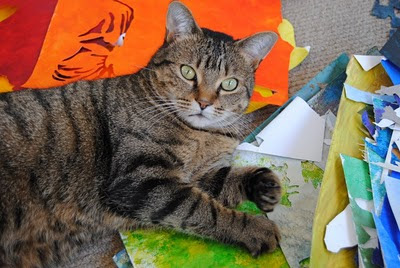 Tabitha on the job- photo by the artist (that would be me).
Make more drawings of sinister-looking rodents. Shortly before Christmas, I began a drawing of our rabbit, Jasper, to give as a gift to a friend who has a fondness for rabbits. I was quite pleased with the drawing until my daughter looked at it and said, “It’s nice, but he looks kind of evil.” I ended up giving the friend a tin of Bag Balm instead. What can I say? Bring on the mice and squirrels. 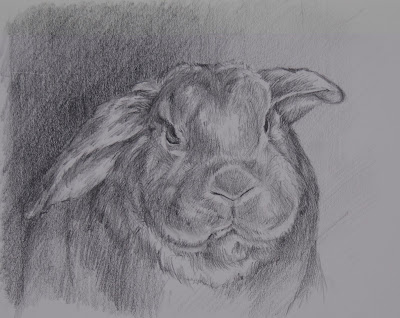 Spend more time discovering the work of other artists. Here are some artists whose work I have recently discovered.
Elizabeth St. Hilaire-Nelson is a collage artist who lives in Florida. We recently “met” (in the virtual sense) and have exchanged Christmas cards (in the actual sense). I think her work is colourful and gorgeous.
Claudia Roulier makes assemblages, collages, and paintings which are funny-bordering-on-disturbed.
I have my husband to thank for turning me on to the work of Brian Dettmer. This guy carves books – yes, you read that right- carves books. Check it out. I guarantee his work will blow your mind.

Pay my hay bill. Sorry V. The cheque is (almost) in the mail.

Stop worrying about money. I have been poor, but neither I, nor my business has ever been bankrupt. Donald Trump has been on the verge of personal bankruptcy and his businesses have been bankrupt not once, but TWICE. So…. who’s the failure again? Plus, this is really my hair.

Spend more time petting my dogs, playing with my cats, talking to my sheep, and less time arguing with the humans in my life.
That’s about it. Happy New Year!

* If it’s in the OED, it’s word.
** If any of you are dog owners and have photos of your dog in a sweater or doggy coat, and you wouldn’t mind seeing your dog so immortalized in a collage, please send those photos to me at: info@alysonchamp.com Extra points for brachycephalic dogs. (That’s four times, baby!)