This play appears in the current issue of Sheep Canada Magazine.

From across the barn, the rooster crows again.
Floyd (sings):   When a man loves a woman
Can’t keep his mind on nothing else
He’ll trade the world
For the good thing he’s found…
Ewe Chorus:       SHUT UP!!!!!

Cat shakes his head in disbelief.

Cat:        Yes Dora, it’s “full of emptiness”. (making air quotes with his paws) And why is it empty, Dora?
Dora:     Because the turkeys were Truly Good and Tasty Animals, and they went to Freezer.
Cat:   Look, let me tell you something about Freezer, okay?  If Freezer is a state of complete peaceand perfect consciousness, then those turkeys began their path to enlightenment on the back of a truck. In fact, I’m pretty sure it was a Ford.
Dora (horror stricken) NOOOO! It’s a REAL PLACE!
Cat:        Oh, it’s a real place all right….
Dora:     Lalalala I can’t hear you!

Dora runs away and hides her head in an empty water bucket.

Flopsy:  Great. Now look what you did. It’s going to take hours to calm her down.
Frank:   Hey Cat! Why you gotta be such a downer, dude?
Flopsy: Yeah.  And I thought you said we couldn’t talk. That was a whole lot of talking for someone who doesn’t talk.
Cat:        I wasn’t talking. In fact, I’m not even here. I don’t exist. It’s all just your imagination.

Cat realizes to his embarrassment that he has just been outwitted by a sheep.

Frank (laughing): Hey Flopsy, I don’t know if this whole “talking” thing is real, but I think you just proved the existence of Cat.

From across the barn, Floyd the rooster crows again.
Floyd (singing):                 And I can’t fight this feeling anymore
I’ve forgotten what I started fighting for
It’s time to bring this ship into the shore
And throw away the oars, forever!

Flopsy:           I can’t take much more of that rooster. Now he’s singing REO Speedwagon.
We’re going to have to fight fire with fire here. Anybody know a song? Some Cole Porter?
Blue Moon of Kentucky?  Anything?  Please!  Anyone?

Dora returns with a water bucket on her head.

Outside, a car pulls into the yard.

Frank:   Uh oh, everybody pipe down! I see lights coming up the driveway.
Flopsy:  She’s home. Thank goodness! Now maybe we can get some rest. Shush, everybody! She’ll hear us!
The Forgetful Farmer enters the barn to turn off the lights.

Forgetful Farmer:     Oh for the love of Pete, what’s with all the racket? Knock it off you animals and go to sleep! Don’t you know it’s Christmas? Now goodnight! I’ll feed you tomorrow.

Forgetful Farmer turns off lights. The barn is now completely dark. The animals are quiet.

Flopsy (whispers):           Psst. Frank, do you think she heard us?
Frank (also whispering): Not a chance. Humans are totally clueless. 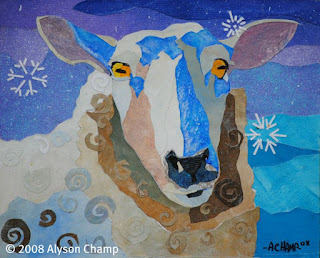