Along the English River

I grew up near the village of Howick, a blink and you miss it settlement in the Southwest corner of Quebec.  The English River, named originally for the English family who settled there – now mistakenly and officially translated into French as Rivière des anglais- is the waterway that runs through the village. The river, as you may well imagine, was the scene of much childhood activity. We fished in it, went boating and canoeing on it, swam (!) in it, rock hopped the shallow rapids, hunted for shells and “artifacts” near the shore, and skated on it in the winter.

Since moving a few kilometers south of  Howick, nearer to the village of St. Chrysostome, we have changed municipalities, but are still on the English River. It is, in fact, right at the bottom end of our smaller corn field.

The English isn’t a spectacular river by any means- no showy, pounding rapids, no steep cliffs tower above it, no swift currents torment it- but it is a pretty river in a gentle, pastoral way. I have painted its scenery many times.
Now that I am experimenting with a wider range of collage subjects, I have grown increasingly interested in making painted paper collage landscapes. The idea of creating a collage image that looks like a painting, but isn’t- this intrigues me. My newest work is entitled “Along the English River/ Rivière des anglais”. 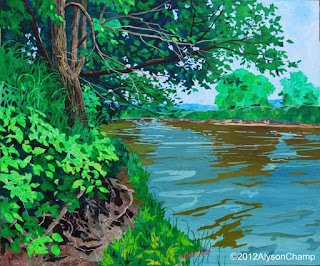 I am so pleased with the way this piece turned out that I have entered it in a juried exhibition in Montreal and also in an online international competition. Wish me luck!

P.S. In case you would like to know a bit more about this little spot on the map of this vast nation that is Canada, just click on the link here.http://quebecheritageweb.com/attraction/ch-teauguay-valley