One evening last fall, my sheep came home to the barn with their fleeces a tangled mess of burrs and thistles. I noticed one ewe was also sporting a fringe of blackberry canes, another one had accessorized herself with a small tree. Now our pastures aren’t perfect, but I did find this odd considering I had gone to some pains to cut down, dig up, and burn as much of this sort of debris as possible. The next morning I went out to check the pastures and the fences and discovered that the back gate was open. The sheep had been out in the fallow no man’s land between out place and the neighbour’s woodlot, no doubt scrounging for crab apples. I cursed irresponsible teenaged ATV riders and closed the gate.

What I had hoped was a unique event began to look more like a pattern when the episode repeated itself the following week, except this time it had been raining. Not only were my beautiful, white, long-wool sheep covered with sticks, burrs and brambles again, but they wrre also WET. The first time had cost me hours of labour pulling out the burrs and disentangling the sticks; the second time I used the hand shears and gave the worst offenders “punk rock” haircuts. At least two of the sheep looked like they had been shorn by a blindfolded lunatic using a lawnmower. 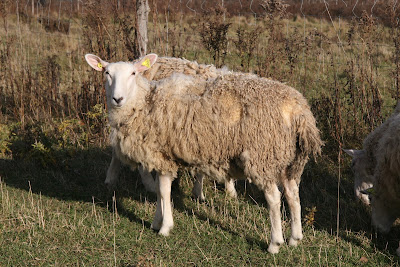 Celeste with haircut. Photo by the artist.

Of course, that back gate was open again. This time, along with the requisite cursing, I also considered getting a padlock or at least putting up a sign asking whoever opened the gate to please shut it behind him (or her), thank you very much. As it turned out, I didn’t have to do either.

One Saturday morning as I was unloading groceries, a strange car pulled into our yard. A blond man in his early thirties got out and introduced himself as Sylvain, our neighbour. His house sits near the end of our long driveway, and although he had lived there for more than a year, this was our first real meeting. Casual observation of his behaviour from a distance had led me to conclude that Sylvain was both trigger happy, (he almost shot our other neighbour while out hunting deer the previous fall), and that he was quite possibly a pyromaniac, as he was always burning something in his yard, and had set fire to our ditch twice in a six month period. It was with some trepidation that I shook his hand.

“I was up here this morning, ” he said, “but no one was home, so I was watching through my scope for your car. Your sheep are loose out in the neighbour’s bush. I have permission to hunt there; I thought they were coyotes and I almost shot them.”

While I was annoyed that my gun wielding firebug of a neighbour could mistake a flock of Border Leicesters for a pack of coyotes, I was even more dismayed that this rather strange man had been using his scope to watch our house. My days of topless gardening were obviously at an end.

“Well, my sheep wouldn’t be loose if some idiot wasn’t always opening our back gate.” I answered.

I explained the situation to him.

“Oh,” he said, “well where does your property end?”

And I explained that to him too.

“Oh.” he said, and paused as if contemplating something, then asked, ” Do you want help rounding them up? I could get my four-wheeler.”

I told him not to worry about it, that the sheep would come back on their own (which they did), if he would just please not shoot them in the meantime (which he didn’t).

This autumn I closed off the back pasture completely so the sheep no longer have access to it at all. Better safe than sorry, I figure. Throughout the year I have continued to check the back gate from time to time, just out of curiosity. I have never found it open since. Not once.

The Hemmingford Studio Tour takes place this week end (Oct. 2&3, 2010) from 10 am – 5 pm, both Saturday and Sunday. I’ll be at Petch Orchards flogging my wares. If you are in the area, stop in and introduce yourself.

Here are a couple of new sheep collages which will be on display during the tour exhibition.

I give you Miss Juliet, 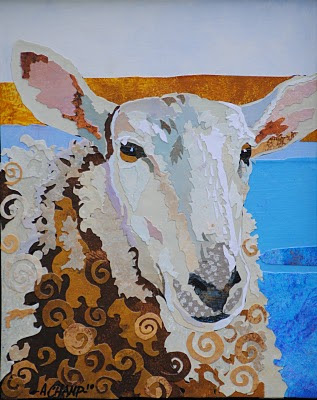 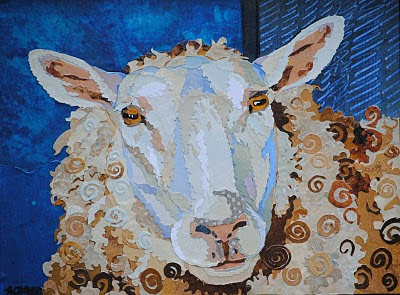 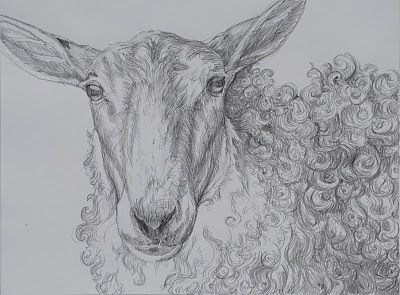