Organization is not the strong suit of artists, or so I have been told. A cluttered work space is, allegedly, indicative of a highly creative mind. If this is true, I should be an artistic genius.

This is what my studio looks like when a journalist is coming over to interview me.

To counteract my natural tendency towards chaos, I am a compulsive maker of lists. I make a list each week of all the things I need to get done, although I admit certain items do seem to carry over for weeks on end. Those are the things I really don’t WANT to do, but which also aren’t urgent.  At a certain point the annoyance of having to transcribe these items from list to list becomes more annoying than actually doing the things. That is when I actually do them.

Also, it is worth noting, if something isn’t on the list, it doesn’t officially exist. This is a scientific fact.

Still Life of To Do Lists with Highlighter and Coffee Stains

So if you are thinking that Write a Blog Post  was on this week’s list – YOU’RE RIGHT!

Another thing on my list was to make an animation of my collage process. I often photograph my work at various stages of its development, so I have a collection of Work in Progress photos.  I have put together some of these images in chronological order to give you a sense of how I work and how the work develops. This is an animation of the creation of Duck Day Afternoon, a 24 x 30 inch painted paper collage on panel. It begins, as all my large works do, with a drawing, and proceeds from there. Let me know what you think.

“What do you mean one of my ducks is simple minded!” my friend Anna Maria wrote with mock outrage in an email to me a couple of weeks ago. In a note I sent her, I had mused that of the three male Muscovy ducks she had given me, one of them appeared to be a little mentally slow. Daffy (my name for him) is definitely different. Whereas the other two are very adept fliers, he can’t fly; when the others zig, he zags; while his companions are out foraging in the yard, he spends much of his day sitting in a corner in the barn looking at the wall. And this isn’t exactly new behaviour. While he still lived at Anna Maria’s place, he one day zigged when he should have zagged, got underfoot, had his tail stepped on and subsequently lost part of it. Truth be told, Daffy is a slow witted, off balance, flightless duck with no sense of direction and only half a tail. 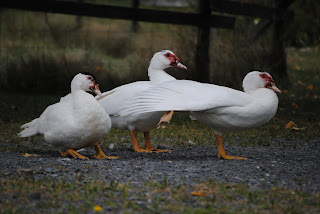 Daffy is the off-kilter duck on the left. Photo by the artist.

In that same email, Anna-Maria went on to remind me that just as people have varying levels of intelligence and competencies, so it is with animals. This is undoubtedly true. Take my dogs, for example. I have one who can slip any collar, and who, through trial and error, learned how to undo the catch on the baby gate to let herself out of the kitchen. I have another who can stealthily rifle through a bag of groceries when my back is turned, extract a package of pastrami without disturbing the other contents of the bag, carefully open the plastic and eat only the pastrami. Pretty smart. And yet we had a third dog so stupid she couldn’t find her way out from under a blanket.

Even among the sheep, an animal with a reputation for stupidity, I have noticed a fairly wide range of intelligence. Take Julius the ram for instance, while not a deep thinker to be sure, he did learn to use his nose to pop the hook on the side gate of the barn to let himself (and the others) out in the morning whenever he felt I was being too slow.

Furthermore, intelligence seems to be inherited. One of my ewes is smart and vivacious and her daughters are just the same. Another ewe, the one we call Dumb Dora, invariably has stupid lambs who get lost in the grass or can’t figure out how to go around an open gate to get out of the pasture, or worse.

One afternoon this past summer, in the middle of a heavy downpour, I noticed my sheep standing outside by the front of the barn, wet, and looking completely miserable. Now, there was no good reason for them to be outside in the rain: the barn was open; they could go in if they wanted to. Weird, I thought. A little later, from an upstairs window, I could see a white shape racing back and forth along the fence line of the pasture behind the barn. I put on my boots.

First I went to scold my stupid sheep for standing in the rain when the barn was open, next I went in the barn to take a look around. Nothing looked amiss, at first. A moment later I noticed a water bucket was missing and I knew exactly what had happened and to whom. It was, of course, Dora’s daughter Violaine who had somehow gotten her head through the handle of the nearly empty water bucket, and it was she who had terrorized the other sheep now left stranded out in the rain, and of course, it was she who was now out by the back fence frantically trying to run away. From herself.

But back to those ducks for a minute. In about ten days, the ducks have a scheduled date with destiny. Destiny being Lavallée’s slaughter house. I have no doubt that I will be able to catch poor, witless Daffy- a sitting duck if ever there was one. As for the other two…I have no idea what I’m going to do. I don’t know how they know, but they seem to be aware of some impending disaster and have recently started roosting up on the wooden supports for the stable cleaner track outside the barn, putting them well out of my reach. I suppose I’ll have to figure something out. But for now, I’m afraid that I must live with the embarrassing truth: That I have yet again been outsmarted by ducks. Like I said before, there is a wide range of intelligence among all animals.

Well, quite a lot, as it turns out. I’m participating in a studio tour and a group show this fall, so I’ve been quite busy of late. I will include more information about these upcoming shows next post. For now, here are two small pieces . 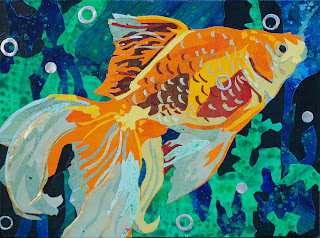 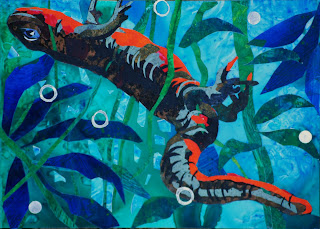 Back to the drawing board er, collage table!
in ducks / goldfish / painted paper collage / salamander 0 comments