The Department of De-Fence

Note: This blog post appears in the Fall 2012 Issue of Sheep Canada Magazine.

CLUNK.
“I am not accident prone!” my husband declares while trying to disentangle the various I.V. lines in his right arm, only to hit himself in the head with the cast on his left.
“That’s not what your mother says.” I answer.
“What does she know?! She’s my mother!”
Ten o’clock in the morning, a warm day in May, my husband is in a hospital bed, recovering from surgery and multiple fractures.
My mother-in-law has just left, but not before regaling us with tales of my husband’s various mishaps. The stories culminate in the re-telling of an incident from his childhood: At the age of two, tethered to the clothes line and under the “supervision” of his older brother, my husband ate poisonous berries off a shrub in the backyard and had to be rushed to hospital to have his stomach pumped only to return home a day or so later whereupon he promptly consumed a bar of soap in the bathroom.
“I was TWO!” he says, irritated.  “And just how does that story show that I am accident prone?”
“No, you’re right,” I say, “that’s not accident-prone. It’s something, though.”
He glares at me.
“And why were you on a leash tied to the clothesline?” I ask.
“How should I know- It was the SIXTIES!”
My husband is a woodworker by trade and so has had his fair share of job-related injuries: cuts requiring stitches, a splinter in the eye, the occasional smashed finger. Since taking up farming, he has had two accidents serious enough to require hospitalization, and, curiously, both of them were directly connected to fencing. No, not the white outfits, skinny swords, and “En garde!” type of fencing. More the “Why are there sheep in the backyard?” type of fencing.
Our farm used to be a goat farm and was fenced with goats in mind. We figured the page wire fences ought to be good enough to hold sheep. 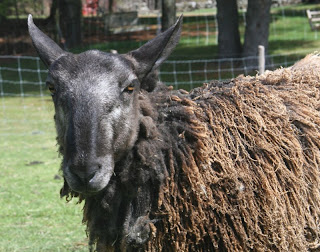 “Omar The Bad”   (Photo © Alyson Champ)
For the first couple of years, the sheep were indeed easy on the fences; normal maintenance was all that was required. Then we added some Blue Faced Leicester genetics into our mostly Border Leicester flock.  One thing I will say about Blue Faced Leicesters, apart from their elegant bearing and gorgeous fleece, they have an uncanny ability to spot a loose picket. Within a year, all hell broke loose. And when I say “broke loose” I mean that literally.
To remedy the loose pickets, my husband designed for himself a gigantic, wooden maul – but he never got to use it. The angle grinder he was using to carve the maul slipped and cut open his right knee: Accident Number One. His recovery took several weeks; the fencing went unrepaired. The sheep continued to graze pretty much anywhere they chose.
Initially, the periodic out of bounds grazing wasn’t really such a big deal, so we let it go. Our farm is a long way from the road and we have no immediate neighbours to complain about sheep in their yard. The fences, though, got seriously damaged by sheep accustomed to pushing  their way under the wire at will, plus implementing any kind of rotational grazing was pretty much out of the question.  Eventually it became obvious that we had to repair the fences. Plans were made for the following spring, bringing us to Accident Number Two.
Accident Number Two involved fence pickets, the front end loader of a tractor, and my husband’s left wrist and ankle. To make things just a little bit worse, this was also the spring that we were able to embark on a long awaited renovation project: having a cement foundation put under our house. Earth was moved; heavy equipment came and went; a section of fencing in the pasture closest to the house disappeared.
Unfinished, damaged, or absent fencing, combined with major home renovations, and a husband temporarily confined to a wheelchair meant free rein for a certain flock of sheep.
“I think the sheep are eating the romaine lettuce.” says my husband, momentarily distracted from a DVD of “Whatever Happened to Baby Jane” by the sight of sheep in our garden.
Out the door I run to herd sheep through a gate back into the pasture where they belong. I see the sheep have arrived in the garden through a section of missing fence, but how did they get into that pasture in the first place? A quick walk out to the back fence shows me a sizable gap between the bottom of the page wire and the ground, along with the ample evidence of the crime: fleece caught on the wire. I patch up the fence with extra pickets, rocks, wire – whatever I can lay my hands on to block the gap. I inspect the rest of the fence for additional gaps, and satisfied that there are none, return to the house.
Later in the summer, on impulse one day in the feed store, I bought myself a length of portable electric fence and a solar battery, thinking that I could contain the sheep and mow our lawn all in one fell swoop.  It was a nice idea. The problem with this arrangement, however, was that I could never persuade ALL the sheep into the temporary corral.  While I could lure some of them in there with a grain bucket, there were always a few holdouts. Separated from their fellows, the sheep in the corral spent most of their time calling out to the others who remained in the pasture – like a very long, very loud game of Sheep Marco Polo.
And, of course, it also meant that the animals not contained within the electric fence were still able to get out. I gave up.
“Do sheep actually LIKE green peppers?” asks my husband seated in his wheelchair, Stephen King’s novel “Misery” open on his lap, as he surveys our yard through the window.
“I don’t think so,” I say, “Why?”
“Because the sheep are out in the garden eating them.”
Out the door I go again, this time determined to block access to the yard entirely. The fence is missing several pickets which I cannot possibly replace. What to do? I root through the piles of construction rubble in our yard and pull out some scrap lumber and a section of wooden railing from our old deck. From this, some extra pickets, wire, and baler twine, I fashion a temporary fence. It isn’t pretty, but it works. The sheep come up to the “fence” and look at it. The vegetable garden remains tantalizingly close, just out of reach. 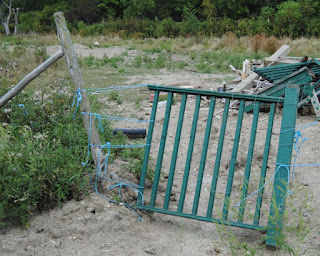 “Fence Installation Project: Do you think I can get a grant for that?”  (Photo © Alyson Champ)
“HA!” I say to them, triumphant. They look at me and walk off. Days pass.
I enter the living room to find my husband peering out the window through a pair of binoculars, Grace Kelly in Rear Window frozen on the TV screen behind him.
“Where are the sheep?” he asks.
“Out in the back pasture, last time I saw them. Why?” I say.
“Hmm. I don’t think so. Here, take a look.” And he hands me the binoculars.
Out the door I go, this time to the car. A plume of dust follows me as I speed down our driveway, onto the road, and then a short distance up the neighbour’s lane. I stop and get out. The sheep are looking at me. They have broken out not to invade my garden or graze the lawn. No. They are in the neighbour’s fallow, herbicide sprayed field eating dried up cow parsnip and ragweed.
“What is the matter with you animals??!” I yell.
“Baaaaa!” they say.
I clap my hands and wave my arms at them. They turn to flee, kicking up their heels and cavorting as they go.  I follow them in the car in order to see where exactly they have breached the fence.
Lacking adequate materials, again I raid the pile of construction debris. Pulling out more wooden railing and scrap lumber, I drag it out across the pasture to fashion yet another patch.
Over the course of the summer, the sheep continued to escape. I continued to patch fences with whatever I could find; my husband remained in a wheelchair.  Our neighbour eventually did me the kindness of mowing down his fallow field. The sheep lost interest in that, at least.
“What are you doing?” my husband asks me through the window.
“I’m moving the electric fence.” I say as I lug the roll of portable fence across the lawn.
“Trying that again?” he asks. 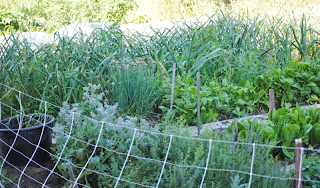 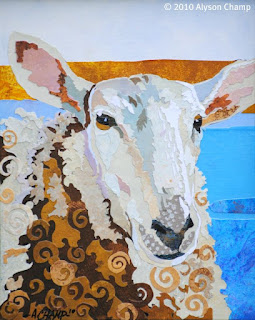