For the past couple of years we have had a raven hanging around our farm. Depending on where you live, this might not seem all that unusual. But we have a lack of ravens here in the Chateauguay Valley. I don’t know why. They are abundant nuisances in some parts of Quebec, but strangely absent here- until recently.

I heard our raven before I ever saw him (or her?). Throughout the summer, Raven would come to visit early in the mornings, establish himself on the roof of our house, and announce his arrival with his song of “quorks” and “gronks” – usually waking us up.

Soon enough, I started seeing Raven in the trees near our pasture. Sometimes he would sit watching me from his perch atop a telephone pole. I would call out to him, and he would answer me with a throaty “gronk!” and then fly away. Clearly we had developed some sort of relationship.

The closest encounter I ever had with Raven occurred one morning when I was on my way out to the barn.  I stepped out through the back door, and Raven, who had been sitting up on the roof of our house, suddenly flew down right over my head. I looked up just as this large, sooty black bird passed so close over me that I could have reached up and plucked a feather off his wing. I think he was teasing me.

Raven still comes around from time to time, although it has been a while since he stood as sentry up on our roof. These days I usually hear him more than I see him, but I always know it’s him:  the call is unmistakable. Below is the first collage of what I plan to make into a Ravens series. 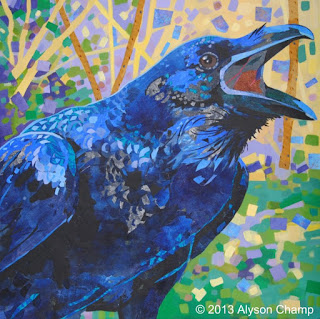 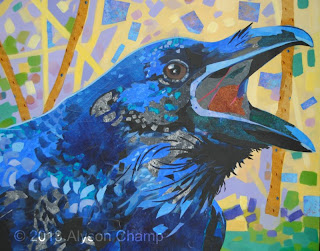