It was March Break this past week which meant I also had a week off from my regular classroom gig. I have been teaching art classes for children for over a decade now. More than ten years! How did that happen? Some of the kids from the very first elementary school art programme I was ever involved with are now married and are having children of their own. It makes me feel like an art grandma.  Perhaps in a few years I will be teaching those children, too.

One of the joys of teaching children is witnessing the surprise and pleasure they get out of exploring a new technique. I like to introduce to them things they might not otherwise get to try, things like found object sculpture, print making, and, of course, painted paper collage. I also like to push the kids a little.

Our projects in February were all about drawing and learning to “see”. We worked on grid drawings – what artists call “squaring up” – in order to help the kids understand that they can observe the parts of an object in isolation and just draw what they see bit by bit instead of trying to make sense of the entire object all at once. Often seeing the “whole”, especially of a complicated object  like a human face, can be very intimidating, so these grid drawing projects are real confidence boosters. 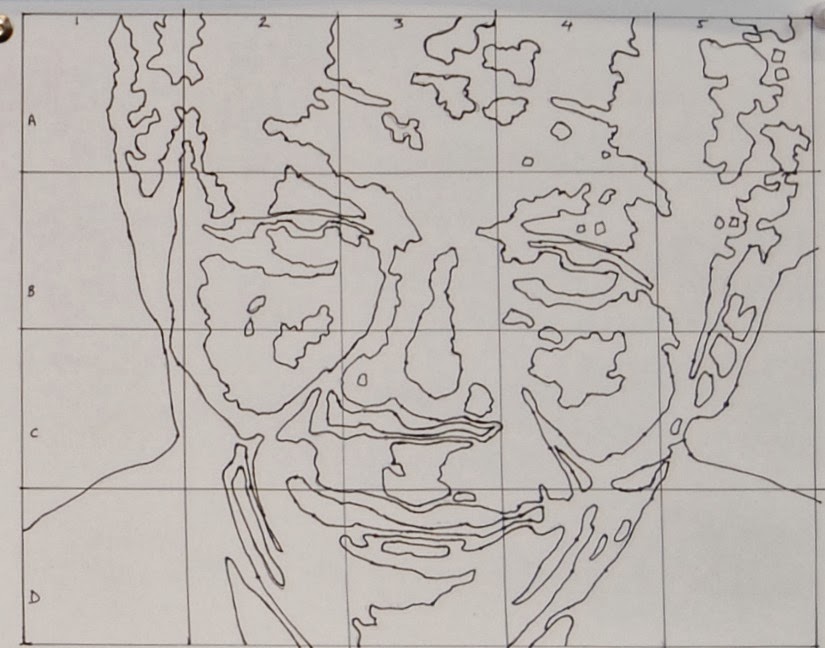 As February is Black History month, I had the kids work on an iconic drawing of Nelson Mandela. They made an 100% enlargement of the original drawing (above) to go from an 8 x 10 to a 16 x 20. It took a couple of classes to accomplish this. I was stunned by the level of patience shown by a class of 9 – 12 year olds. You could have heard a pin drop in the art room, these kids were so focused! 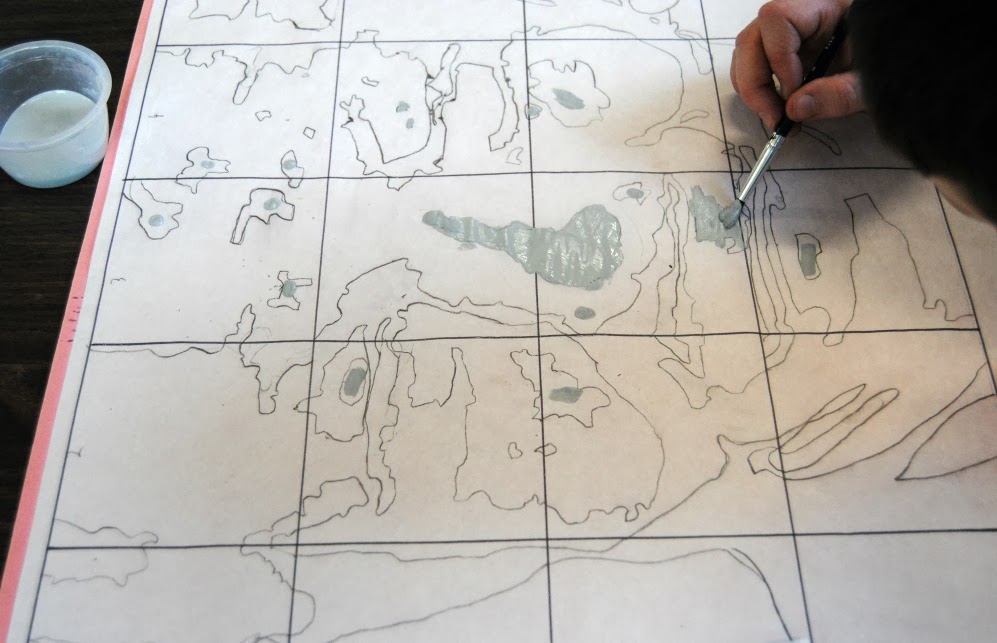 Once the drawings were completed, we then moved on to making a black and white poster out of the drawing. I supplied the class with four values of paint from black to light grey. The kids were responsible for figuring out which value went where. 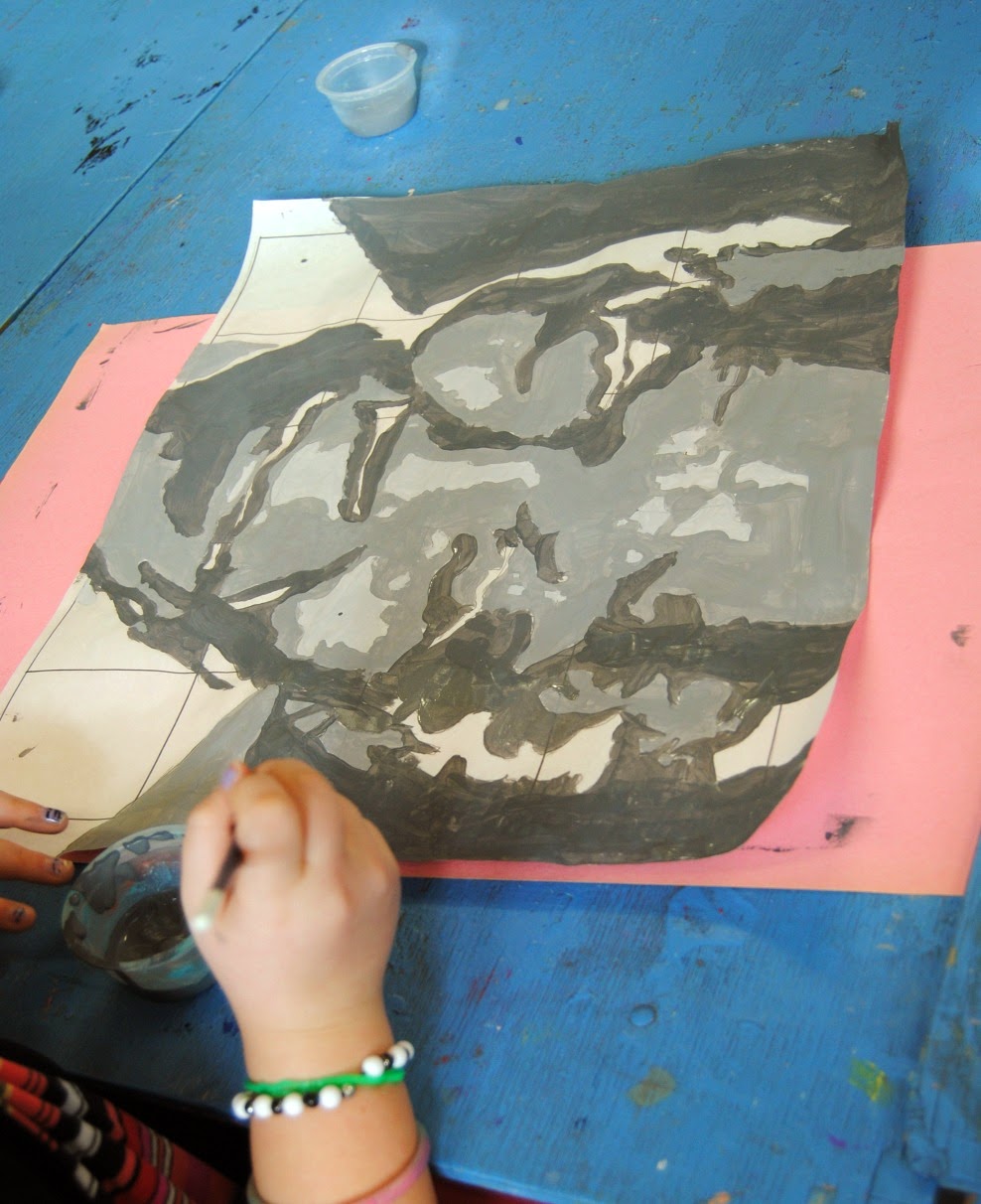 Pretty impressive results! It will be fun to see all these posters displayed together. 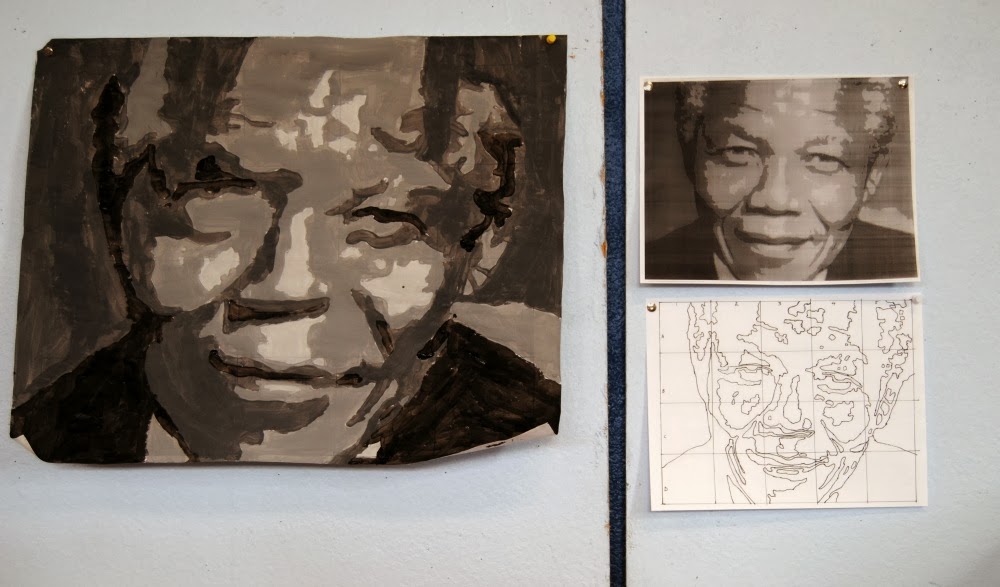 I will be back to school this coming Wednesday. With Spring just around the corner (I hope) it seems appropriate that we begin to discuss the theory and uses of colour.
in children / drawings / teaching 0 comments
December 2, 2010  by alysonchamp

Can I Get There from Here?

As I wrote in my previous blog post, my studio is finally more or less finished, and every Saturday afternoon for the past month I have been teaching an Intro to Acrylics class to an absolutely terrific group of talented and enthusiastic women who have decided to throw caution to the wind and learn to paint.

Starting a painting is often intimidating, and not just for beginners, but for more experienced artists as well. A blank canvas is a scary thing- so much possibility, not only for success, but also for failure. How do you start?

When I was an art student, I can remember some of the most useful and instructive classes I ever attended were those where the teacher did a painting demonstration for the class. Not only were you told what to do and when, but you were actually shown how to do it. That really de-mystified the process for me. I once watched a teacher in a figure painting class paint a 24×20 inch nude portrait of a model, alla prima style, in just under three hours. He showed us how to make a basic drawing on the canvas to establish proportions. We watched him block in the major areas of the painting, watched him lay down shadows, make choices for colour and value, gradually developing the whole image, until the end when we saw him paint in the brightest highlights in the woman’s hazel eyes and on the tip of her nose.

And then we watched him scrape the whole thing off with a knife when he was done.

He didn’t destroy the portrait because it was a bad painting, but because it was just a painting, a job, a process, made simple for him because he knew what he was doing. He was capable of reproducing the same steps over and over again, with consistent results.

That type of demonstration was what I had in mind last week during the Saturday acrylics class. Unfortunately, I am a slow worker and I talk too much in class, so I didn’t quite get the painting finished during class time. 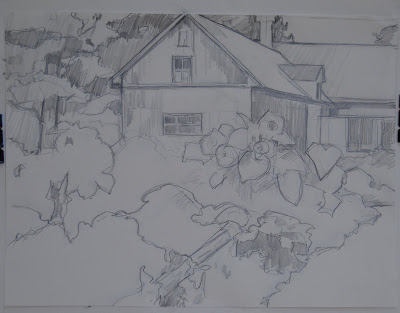 When the composition is complicated, I like to work things out on paper first. This saves me a whole lot of headache later on. It’s so much easier to correct problems on paper first, rather than trying to fix things on the canvas later. I transferred the drawing onto the canvas by simply putting some charcoal on the back of the paper, placing the drawing over the top on the canvas, and then retracing the basic outlines again with a pencil. When I removed the paper, a simple charcoal outline is left on the canvas, which I then secure by painting over it with diluted, earth toned paint. (Sorry, I forgot to document that stage.) 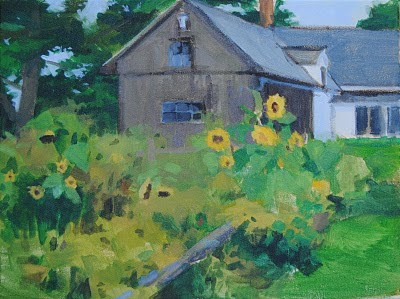 Next, I try to establish the most important shape areas, colours, and shadows. It helps me to have a sense of where the painting is going in its entirety. I keep the paint fairly thin in order to avoid unpleasant lumps and visible brushwork where I perhaps don’t want them. 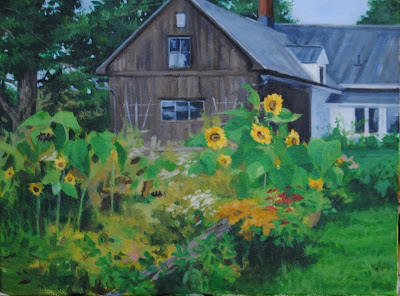 The middle phase of any painting is usually the worst part. This is where the tough decisions get made. I can see that some of the perspective is wrong and that the busy colours and brush work on the barn wood and the roof is too distracting for its place in the composition. It doesn’t recede enough, and since I want the flowers to dominate, I can see I’ll have to tone that part down and reserve the colour and detail for the flowers in order to achieve maximum impact. 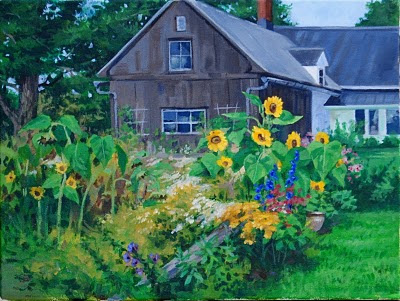 I put a little more time in on this canvas and it feels pretty much finished. There may still be a few wrinkles to iron out, but I’m fairly pleased with it. The art class can critique it on Saturday!