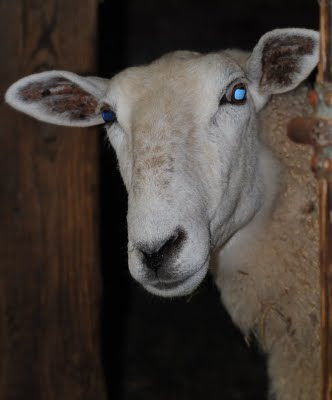 Dumb Dora in the Doorway- photo © the artist

“You know, ever since 2011 began, crazy stuff has been happening. Trouble on all levels: here on the farm, in the Middle East … a lot of unrest … must be something to do with the planets.” my friend Anna-Maria said to me recently. From the start of lambing back in February, bad things kept happening on her farm. There were stricken ewes, rejected lambs, surprise pregnancies gone horribly wrong, outbreaks of foot rot and orf: it was a litany of disaster.

“Well,” I said, trying to inject a little levity into the situation, “maybe you’re getting a jump on the whole 2012 thing. Maybe the end of the world really is coming- and it’s starting on your farm!”

Anna-Maria laughed. “Shh, don’t say that!,” she said, “you might bring it on. I mean, it’s not like I’m really worried about the apocalypse, but why toy with it?”

Not being an especially superstitious person, naturally I scoffed at the idea that you could bring on your own bad luck. Besides, nothing was wrong on our farm…

The first thing to go wrong on our farm happened almost immediately. An older ewe, always a little peculiar, began acting really strangely. Although she continued to eat well, I often found her lying alone in dark corners of the barn. When she did move about, she was slow, her gait awkward, her expression blank and staring. I combined these symptoms along with her pre-existing quirks- compulsive lip licking and a crazy sensitivity to having her back scratched – and the search engine result was always the same: SCRAPIE. I phoned the vet.

As luck would have it, my regular vet was on vacation. An eager, new veterinarian, fresh out of school, arrived at our farm. He examined the ewe and agreed that her gait and nibble reflex were odd. She also had pneumonia and he treated her for that. When I asked him if he had ever seen scrapie before he admitted he hadn’t, but was nevertheless fairly sure he would know it if he saw it. He agreed that, based on the ewe’s history and her current symptoms (pneumonia notwithstanding), she was indeed a suspicious case. I was horrified. The vet told me not to worry, that the risk of scrapie transmission to humans was “theoretical” at best.

“Besides,” he added in all seriousness, “the disease has been in circulation for at least four hundred years and if it were transmissible to humans then the Scots would all be crazy.”

I felt so much better.

CFIA phoned me straightaway and placed our farm under quarantine. They arrived shortly thereafter to inspect my deranged ewe. Preceded as they were by their sheep beheading reputation, I was fearful at what the future might hold for my sheep.

After observing the ewe and bearing witness to her Exorcist –like reaction to having her back touched, the CFIA vet agreed that the ewe was peculiar (no dissent on that particular question), but as she appeared to be in good condition generally -her pneumonia was clearing- they opted keep her in quarantine until she either turned out to be genotype resistant, or for three months. I welcomed the inconvenience if it meant I got to keep my sheep. Thankfully, the worst was behind me. Or so I thought.

No sooner had our scrapie scare been dealt with than another ewe became sick, this time it was Dumb Dora. After the scrapie episode, I developed a sense of foreboding and began stocking up on supplies that I might need in case of sheep related emergencies. In addition to the extra syringes, gloves and antibiotics, I picked up a gallon of glycol to treat toxaemia- just in case. So it was no surprise really when Dora began exhibiting symptoms of toxaemia two days later. I congratulated myself on the purchase of the glycol.

A day went by and Dora showed no signs of improvement. I knew my regular vet was in the area, so I asked her to stop in and have a look, just to be sure. The vet examined Dora, confirmed the toxaemia diagnosis, and left me with instructions to feed the animal whatever she was willing to eat, and also to increase the dose of glycol- which I did.

I was dismayed to see no improvement in Dora by the following morning. If anything, the ewe looked worse, and in addition to the jaundice, lethargy and anorexia , she now had a new symptom: black urine. Black! That couldn’t be good…

“No, that’s very weird.” the eager, young vet said when I phoned the clinic. Clearly this was not toxaemia. His scientific curiosity piqued, he came out to the farm to have a look at the ewe and phoned me later to tell me that blood samples he had taken revealed that Dora was having a haemolytic crisis.

“Basically, all her red blood cells have exploded,” he said to me, “that’s why her urine looked black. You haven’t been feeding her onions, have you?”

“Onions?” I asked. What kind of weirdo did this guy think I was!

“Well, it can be caused by excessive consumption of onions. I felt compelled to ask.” he said, clearly assuming I was some sort of weirdo. “So, since we’ve ruled out the onions that leaves us with an autoimmune reaction or copper toxicity. Copper poisoning seems more likely. You haven’t been giving the sheep pig feed, have you?”

The prognosis for copper poisoning was not good and the source of the copper was a mystery. I wracked my brain trying to remember everything I had fed the sheep, what they could have gotten into. Had they chewed on water pipes? Was my grain somehow contaminated, a mineral block mislabelled? None of the answers seemed especially realistic. Only one possible solution remained.

The previous fall I had raised twenty Guinea fowl for the freezer. They proved to be my most ill conceived and expensive farming idea to date. By the time they had reached a suitable table weight, the Guineas had cost at least $25 in feed per bird, all of this excluding the cost of slaughtering them, plus the time and general aggravation of keeping them- to which I could now add the extra cost of vet visits and copper antidote for sheep. Worst of all, the Guineas were inedible; stewed boots would have been more appetizing.

The reason for the poor feed conversion ratio of the Guineas only became obvious when I shovelled out the litter from their pen. In addition to the shavings, I also shovelled out at least twenty kilos of feed, maybe more. For the want of a better place to put it, I buried the feed laced litter in the manure pile and I covered it up, thinking to keep it out of reach of my dogs. I guess I should have been more concerned about keeping it out of the reach of my sheep.

Over the weekend Dora’s condition worsened and I fully expected her to die. Unable to find anyone willing to shoot her, I resolved to have my regular vet come out first thing Monday morning and euthanize her. Monday morning came, and Dora was still down…until the vet arrived.

“You’re not going to believe this,” I said to the vet as she got her equipment out of the van, “but that ewe must have heard me on the phone to you. Fifteen minutes ago she got up.”

Sure enough, when we got into the barn, there was Dumb Dora, dopey as ever, but looking quite healthy, happily munching away with her flock mates. She was no longer jaundiced, her urine was a normal colour, and she didn’t appear to have lost much body condition. You would never guess that anything had happened to her.

“She actually looks pretty good,” said the vet, completely puzzled, “ but if you want to confirm the diagnosis of copper poisoning, we would have to do a necropsy and send the liver to P.E.I. for analysis. What do you want to do?”

I sighed and thought for a moment. At this point, if anybody’s liver was going on holiday to Prince Edward Island, it ought to be mine. “Oh, forget it.” I said, “Just leave her.”

Maedi Visna, caseous lymphadenitis, Chlamydia psitacci. The more time I spent researching sheep diseases, the more anxious I became. We hadn’t even started lambing yet; what else was going to go wrong? I was too embarrassed to phone the vet any more, especially since the receptionist had started answering the phone with: “Hi Alyson. What is it this time?”

Eventually and against all odds, Dora did get better. Our scrapie case turned out not to be scrapie at all, but a combination of pneumonia, overgrown feet and excessive Googling. I wish I could say that this was the end of our bad luck, but it was really just the beginning. Out of a flock eight ewes – in addition scrapie scare and copper poisoning- we’ve had two abortions, two retained placentae, one barely averted prolapse, ring womb , breech lambs, one dead lamb, a foot abscess, entropion , inexplicable lameness and now lice. Who knows what plagues summer will bring?

So the moral of this story is…. I guess there really is no moral. I’m still not entirely convinced that you can bring disaster your way by merely taunting it. Sometimes bad luck just happens. You learn what you can from it, and then you move on. Now I have some tough decisions to make. I know farmers always say culling makes the herd, but if I were to cull all the trouble makers from my flock, I would be left raising chickens, which, come to think of it, doesn’t sound like such a bad idea! 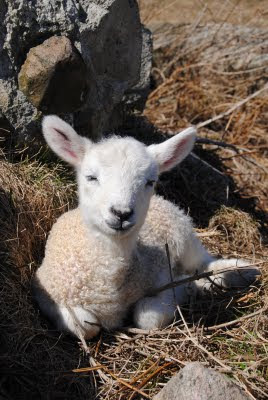 Sleepy in the Sun – photo © the artist