I’m not exactly sure what it is about sheep that is so appealing, but I’m happy to know that I’m not the only artist to find myself visually hooked on them. I have recently come across a collection of drawings by British sculptor Henry Moore depicting the sheep he saw outside the window of his studio.

He too was fascinated by their beauty, their solid shape, and their behavior. Several of the drawings show the interactions of lambs and ewes, which bring to mind some of Moore’s maternally themed sculptures. 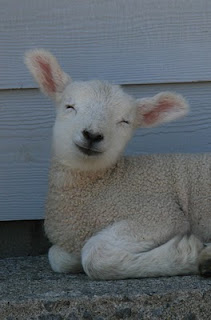 While we are on the subject of sheep and maternity, and with lambing nearly upon us, I can’t help but think back to last year’s experience with lambing. It was the first time we had bred our ewes, and as much as it was exciting, it was also nerve-racking and exhausting. Lambs, much like human babies, prefer to arrive in the middle of the night or the wee small hours of the morning. I spent a number of long nights out in the barn, waiting and watching and acting as midwife. The birth of our first lamb, however, I did not witness as she came as a total surprise. She was a few days early, and the ewe, a first time mother, didn’t really show much sign of going into labour. I got quite a shock when I went out to the barn early one morning to feed the sheep and heard a little voice calling out, “Baaa”. I looked around but could see nothing in the pen, just my sheep standing at the feeder waiting to be fed. I went into the pen with an armful of hay and again, “Baaaa”. There at my feet, in the bottom of the hay rack, was a beautiful little white lamb, still wet, and shivering with cold. Her mother had given birth to her and then, not knowing what to do, abandoned her. The baby had crawled into the hay to keep warm. Ewe and lamb had to be forcibly reunited and the ewe needed to be restrained in order to allow the lamb to nurse. It took the better part of a day before mother and child actually bonded, but they did, and the ewe proved to be an excellent mother, if initially a reluctant one. 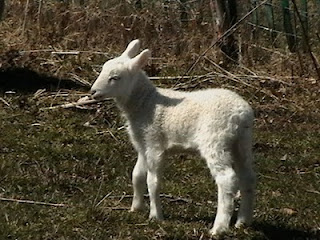 What’s on the Easel
My collage exhibition is drawing to a close. The last day is April 4th. I’m delighted that my sheep collages have proved to be popular and I have sold several of them. I guess people just like sheep! 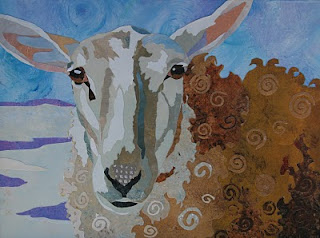 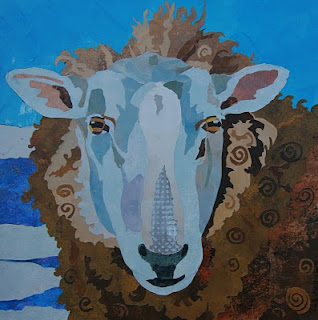