We are having a fitful start to spring out here in Southwestern Quebec. One day it’s blisteringly hot, the next day it’s snowing. My rhubarb and garlic are both up and doing well, but with this unpredictable weather, I don’t dare plant anything in the garden because one day to the next it’s hard to know what to expect. I guess that’s just how it is when relying on Mother Nature; you have to learn to expect surprises.

Last Fall I borrowed a young ram from a friend. Ian Brown (not to be confused with the writer of the same name) is a Dorset/Jacob cross, and I fell in love with him at first sight. He was such a cute little fellow, I was curious to see what the resulting offspring would look like if I bred my ewes to him. 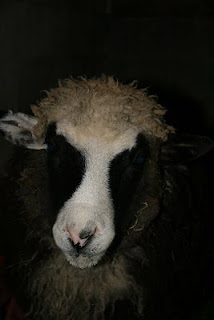 I thought he might be a little small for the task, and he was certainly inexperienced, but then I figured that Nature invariably finds a way, so after a few days in de-worming quarantine, I put him in with my ewes. He was very interested in the girls. Unfortunately, the feeling wasn’t mutual. Their reaction to Ian fell somewhere between horror and disgust. In his deep, baritone voice (think ovine Barry White), Ian would call to the girls and approach them with what I imagine must have been something like, “Heyyy Baaaaaaby!”. And the girls, well, they ran as fast as they could to whatever place he wasn’t. When he saw the ewes running, of course Ian would run too, no doubt thinking that if they were running, there must be some reason to run. Poor Ian, he never caught on that HE was the reason. This went on for several days. Ian would approach the ewes, the ewes would run; Ian would run in pursuit of the ewes, the ewes would run faster; Ian would try to catch up, the ewes kept running, and so on. For about a week we must have had the most fit and thoroughly exercised sheep in the county. It also seemed highly unlikely that any of them were going to get pregnant that way.

Finally I decided to take matters into my own hands. I put Ian and one of the girls, Fionna, who was in heat, into a pen together. A couple of flakes of hay, a little grain, a water bucket, some soft lighting: the stage was set for sheep romance. Ian was certainly happy with this new arrangement. Fionna couldn’t run away, nor did she seem inclined to- she was too busy eating. Ian tried to approach the matter from several different angles, but Fionna continually evaded him, chewing all the while. Once or twice, I saw her shoot him a look that as much as said, “Do you mind? I’m eating! Quit bothering me, you jerk!”. I started to think that my plan was a lost cause.

I crossed my fingers and left them together for a day or two, and then returned them both to the fold. The others ceased running from Ian Brown and things eventually settled down. The girls accepted Ian’s presence, but there didn’t seem to be a lot “going on”, if you catch my drift. I continued to hope. About two and a half weeks later, what hope I had was dashed when I noticed Fionna had come into heat again. I had to conclude that Ian was just the wrong ram for the job. So I sent the poor boy packing and brought in a bigger, older Border Leicester ram (Julius) to finish the job before my girls went out of season.

I began to suspect something was up a few weeks ago when I noticed a couple of the girls looking very pregnant- too pregnant for Julius to be the father. It seems Nature had some surprises in store for us after all, and I don’t just mean the weather. Sure enough, last week the lambs started arriving. 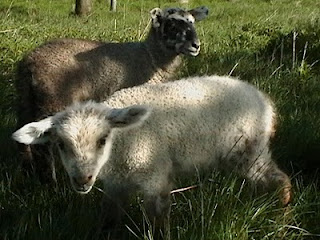 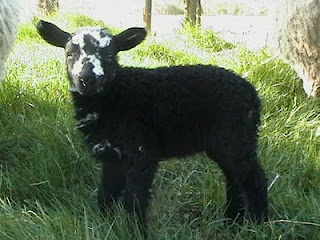 As yet unnamed ram lamb.

I’m still in the planning stage for several collages. In the next few days I’m going to have to make some decisions about colours and papers. For the time being, I’m still drawing. Here is the line drawing plan of my first big landscape collage. The subject is the Port Daniel lighthouse in Gaspé, Quebec. 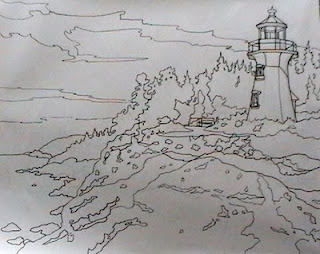