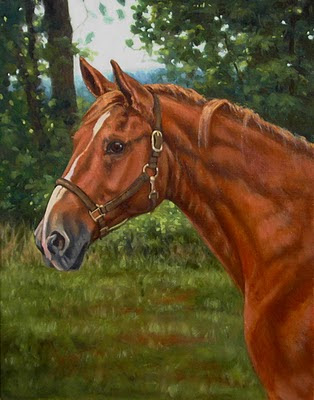 I had one of those moments recently where I was reminded of why I rarely do commissioned work: it’s a pain in the neck. I didn’t always have that opinion, though. For years commissions formed the main part of my artistic income, my bread and butter, so to speak.

When I spent most of my creative energy producing equine paintings, not only did I accept commissions, I eagerly sought them out. I traveled to horse farms, training facilities, and race tracks. I met all kinds of people- some real characters,too- and got a first hand look at the “back side” of horse racing in all its weird, distasteful, beautiful, hard working, corrupt, and somewhat faded, glory – something most people never get to see. 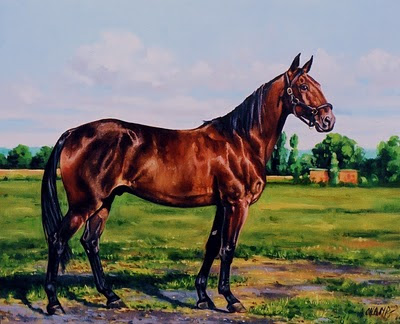 So why did I give it up? Well, for one thing, the market basically bottomed out. The race track in Montreal closed and a lot of the people who were in the business either got out of racing entirely or pulled up stakes and moved elsewhere. There was also the question of my stifled creativity and restricted artistic growth. When you spend all your time working according to the specifications of other people, you don’t really get to grow much as an artist. Commissioned work very seldom allows you the opportunity to experiment or take chances. He who pays the piper, gets to call the tune, and after a while, dancing to someone else’s tune gets a little boring.
Then there is the Human Factor: you have to handle other people’s egos, their unrealistic expectations, their sentimental attachments, and in the case of the very rich and very busy (mostly) businessmen/racehorse owners, you also have to also have to work around their crazy schedules.
I don’t mean to suggest that doing commissioned work was a completely negative experience, on the contrary! It taught me the two most important rules for an artist: 1) Always Have a Written Contract, and 2) Always Get a Nonrefundable Kill Fee of 30 % Upfront. It also taught me how to say no to jobs I knew just wouldn’t work out, how to humour difficult people, and how to distance myself from my work so that I didn’t take criticism personally. And if I hadn’t danced to the tunes of others, I would have been deprived of such learning experiences as:

– Being commissioned to produce a double portrait of a teenage girl and her horse only to have the ‘girl’ part of the portrait proclaimed unacceptable by the unpleasant mother because the LIKENESS WAS TOO GOOD! The girl had a rather prominent nose, which I had faithfully reproduced. The horse part of the portrait was deemed adequate and they eventually settled on the horse alone.

-Receiving photos in the mail of an aged brood mare and being asked to paint a portrait of the horse, but would I please: straighten the animal’s back, lift the sagging belly, remove a scar on the neck, flesh out the neck a little more, make the eyes more youthful, fill out the mane, and not include all the ear hair. I should have asked them if they would perhaps have preferred that I paint a different horse entirely.

-Being handed a handful of blurry, underexposed, distorted snapshots of a standardbred in a stall, and being asked to immortalize an animal I could barely see.

-Having to do a photo shoot of a racehorse outdoors in a snowstorm because the trainer was only available that one day. The owners wanted a summer scene.

-Delivering a completed racing portrait to an owner only to have him look at it and say, “But that’s the wrong horse.” Whereupon ensued a rather heated cell phone conversation between the owner and the trainer in which the owner said, “Bay? What the hell is bay?!”

-Being paid by an owner in cash,in thousand dollar bills, from a desk drawer stuffed with money, the provenance of which I dared not ponder. Fortunately he didn’t want change, either.

-Being sent to the wrong address and ending up at a sort of abandoned looking horse farm, only to find myself alone and surrounded by Rottweilers.

-Arriving at a training facility to photograph a stallion worth a couple of million dollars, and being told by the trainer that they were too busy to deal with me, at which point he handed me a towel and a bucket full of brushes and said, “Go put him in cross ties and groom him yourself.” So I did. 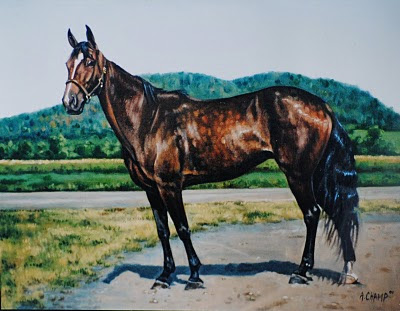