Pinceau, aka The Goat

I never fully understood the connection between goats and the devil until I owned a goat, and then it all became clear. It’s not their horns or their weird eyes that make them seem evil. It’s their personalities.
Sheep will test your fences, get into your garden, run when you don’t want them to, or refuse to move when you most need them to, but what sheep seem to lack, and what goats possess in abundance, isn’t so much intelligence as it is a creative imagination: the capacity to posit the big “what if “, as in

“What if I turn the key in the tractor ignition?”

“Suppose I eat this bucket handle?”

“I wonder what would happen if I picked up this handsaw and
ran away with it?”

The Goat never ceased trying to find new ways to amuse himself- amuse himself and torment us. Ever the nimble escape artist, he broke, jumped, or climbed his way out of every stall, pen, or paddock he was put in. From his point of view, a fence wasn’t so much an enclosure as it was a suggestion: “You probably should stay in here and eat this grass…but then again, you might prefer to be out there eating those currant bushes. Really, it’s entirely up to you.”

He ate through electrical wiring in the barn, pulled insulation out of the walls, broke windows, collapsed feeders, and destroyed the slop sink by standing in it. With lips as quick as the Artful Dodger’s fingers, The Goat could go through your pockets and grab your wallet, a pen, a utility knife, a syringe full of penicillin, a pair of hoof shears, or just about anything else you’d care to mention, and be off with it in a flash . You wouldn’t even know something was missing until you found yourself patting your pockets, saying, “Now where the heck did I put that….”
Too many times my tool belt clad husband would go out to the barn to repair some goat-related damage and come back with half his screw drivers missing. Or his tape-measure. Or his pliers.
And that myth about goats eating anything and everything? Well, that’s not a myth. They really will eat anything. I didn’t believe it either until I witnessed The Goat cheerfully scarfing down a plastic bag with a side order of latex glove.

In the end it wasn’t his appetite for destruction that ended The Goat’s tenure here as much as it was simply his appetite. One day The Goat got out into the yard and ate my husband’s plantation of cherry trees. And that was that.

Now, The Goat lives at my friend Anna-Maria’s place. No, it wasn’t an act of revenge for those horrible (but ultimately tasty) Muscovy ducks that she gave me. As crazy as it sounds, she really wanted The Goat. Honest! 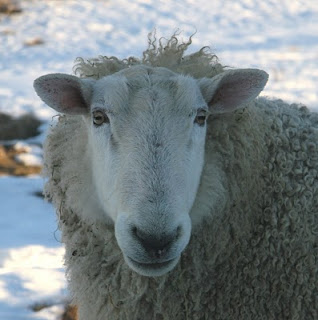 I have almost finished all the collages for my upcoming exhibition, and yes, many of these new collages feature my sweet, beautiful sheep. I promise to have all the photography done for the next post so that those of you who can’t get to the show itself will at least be able to see a virtual version of it. Until then I’m happy to share with you some of the reference photos which serve as the inspiration for my work. And no, there won’t be any goat collages! 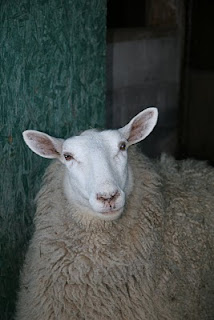