Sheep Pellets of Wisdom: The Year in Review

Well, here we are nearing the end of another year. Although I am looking forward to what the New Year might bring, like most people I can’t help but cast a glance backward over the old year now drawing to a close. On our farm, 2010 was a pretty good year. We had a number of successes: a healthy little crop of lambs which sold easily, many bags of beautiful fleeces, a freezer full of fat roosters and Guinea fowl, and a wonderfully productive vegetable garden with some of the most beautiful tomatoes I have ever grown. In the failures column, we had no zucchini, inedible pole beans, edible but strangely deformed pumpkins, some trouble with pasture parasites, and a favourite wether had to be euthanized. We got some things right and we got some things wrong. Where the sheep were concerned, 2010 was a year of learning from mistakes made the previous year and, no doubt, making new mistakes- ones which I am sure are bound to reveal themselves in due course. But that’s for next year. For now, here are the top twenty things I learned about sheep in 2010.

20. From the point of view of the sheep, there is no such thing as too many windfall apples.

19. From the point of view of the shepherd, “too many” windfall apples is approximately one half bushel less than the amount required to cause gastro-intestinal upset in sheep.

18. The friendliest, most persistently affectionate animal known to humanity is a 200 lb wether with diarrhoea .

17. Don’t de-worm sheep on a day when it is cold and wet unless you also would like to be cold and wet.

14. Under no circumstances ever tell your dinner guests what is under that tarp outside the barn. If anyone asks what it is, just say, “Stuff”.

13. Sheep who turn their noses up at slightly coarse hay will, in the very next instant, eat their straw bedding.

12. Sheep are untroubled by such concepts as irony or logical consistency.

11. The first time your ewes lamb, your whole family comes out to the barn with you in the middle of the night to make videos or take pictures or to otherwise be a witness to the miracle of birth. Lambing the second time around, when you complain to your husband about having to go out to the barn at two am, he says, “Well, you were the one who wanted sheep,” then rolls over and goes back to sleep.

10. To a lamb, everything looks like an udder except an udder.

8. When given a choice between running through a gate to rejoin its mother and running headlong into a fence, nine times out of ten a lamb will choose to run into the fence.

7. A fat lamb will always find a way to get into the creep feeder. Getting out is another matter.

6. The first time you take your lambs to the butcher, you cry in the truck during the drive to the slaughter house. The second time, you plan the menu.

5. The most agile animal on the planet is not a gazelle, a cat or a squirrel. It is an overweight seven year old Border Leicester ram who does not wish to have his feet trimmed.

4. If your sheep are standing outside in driving rain when they could be inside, one of two things has occurred: either a) the doorway to the barn is currently occupied by a flock of bad tempered Muscovy ducks or, b) one of Dumb Dora’s offspring is in the barn, racing around with a bucket stuck on its head.

3. A long wool sheep with an itch is a force of nature.

1. To look out at your pasture in the spring and see it clothed with healthy ewes and playful lambs is possibly the best feeling in the world. 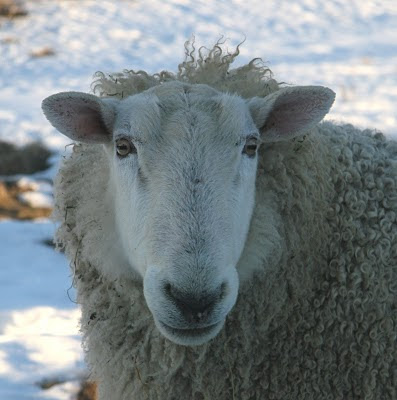