Something to Crow About? 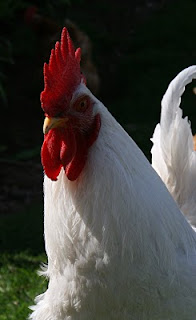 If you found yourself passing by our yard on a summer evening sometime in the mid-1970’s and heard a cry of “WILLIAM!”, followed by a frantic scattering of children, you might think you were witnessing a game, perhaps some local variant of tag or British Bulldog. But in that notion you would be mistaken. “WILLIAM!” certainly wasn’t a game; he was a rooster.

For reasons I can no longer remember, in my childhood I developed the strange hobby of breeding Bantam chickens. Certainly they were pretty birds, coming as they did in a wild variety of colours and with all manner of fancy plumage. I had Cochins and Silkies, a black Polish hen, a beautiful pair of Mille Fleurs, and…. William. I don’t remember what breed he was, but he was tiny and multicoloured: gold on the neck, dark on the breast, with rusty wings and back, and he had a long opulent tail of the most exquisite dark iridescent green. He truly was a handsome little fellow. Yet only a fool would have been deceived by his lovely appearance and diminutive size. Simply put, William was a nasty piece of work.

An interrupter of games and a spoiler of fun, determined to eradicate all forms of childhood entertainment, William was a ferocious flurry of hackles, talons and spurs. Fast and devious, he would surprise us coming around corners or spot us from across the yard and then run at us full tilt. Nowhere was safe. He chased us. He jumped at the backs of our legs. And worst of all, if he could manage it, he flew right up at our faces.

Not only was he a misery to me and my family, but woe betide any visiting cousin or neighbour. The last straw came one day when I was playing outside in the yard with my best friend- a girl with waist long hair. William spotted us enjoying ourselves from some distance away. He ran at my friend , launching himself at her head and somehow in his fury, he got himself tangled in her hair. She was screaming and crying; he was flapping and fluttering. To remedy the situation I did the only thing I could think of: I grabbed a stick and swung.

Luckily, I missed my friend’s head. Unluckily for William, I did not miss his. The rooster dropped to the ground like a stone and lay there too stunned to move. I thought I had killed him. After what was probably only a few seconds (it seemed much longer), he got back on his feet. Humiliated and chastened, he made a staggering exit from the scene. And his pride wasn’t the only thing that he left without: he also left without his tail. Every single one of his beautiful tail feathers had fallen out and lay in a small heap on our lawn. William was never quite the same after that. Perhaps his change in personality was due to that blow to the head, or perhaps he was simply embarrassed. Either way his reign of terror ended. His tail never grew back either. 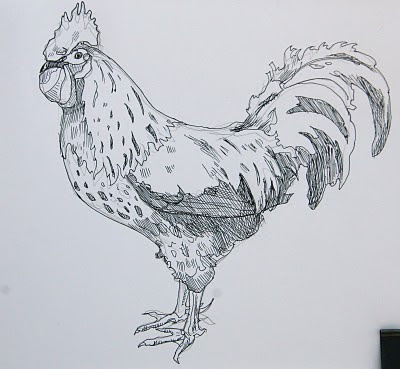 I have a series of commissions looming- all collages. One will be my first ever large-scale landscape. I am both excited and a bit apprehensive about that. Soon I will also start work on a couple of dog portraits. Those are always fun. I’ll post photos of the work in progress as I go. Strangely, the collage commission which has piqued my interest the most is an order to produce a series of roosters. I’ve gotten as far as making some preliminary drawings, shown here above and below. 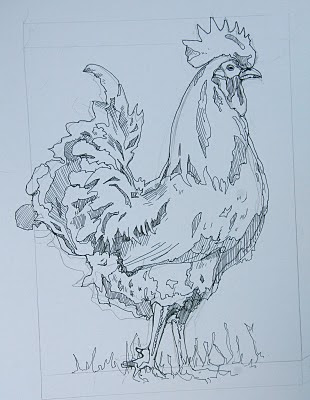