The Case of the Purrrrloined Kitten

When my daughter was in primary school, fundraising activities were common occurrences. I remember quite clearly one day in December when she and a group of friends spent a chilly winter afternoon going door to door selling bread. They came home  a couple of hours later with a sizable order list. And a kitten.

When I asked where the kitten had come from, the kids said they had found her shivering in a ditch by the side of the road, presumably abandoned. The kitten was a tiny little thing, maybe five weeks old, and my daughter begged me to keep her. Since I have a hard time putting out an animal once it has come into my house, I really couldn’t refuse. 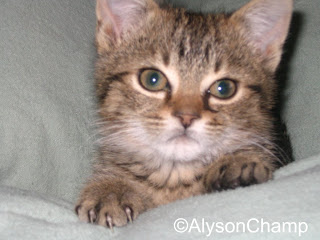 Tabitha soon became a most cherished member of the family, and never for a moment did I regret taking her in. I also never questioned the “kitten in the ditch” story that the children told me. We live in the country, and, sadly, animals are abandoned by the roadside all the time.

Five years or so later, my daughter came up to me one day and said, quite out of the blue,

Now, I don’t know if you have ever been the parent of a teenager, but if you have, you know that those aren’t words that you really want to hear. Fearing the worst, I sat down to listen to what my daughter had to tell me.

And quite a tale it was.

“Remember when we brought Tabby home and I told you that we found her in the ditch?” my daughter said to me.

“Well….we didn’t really find her in the ditch,” my daughter confessed, “we stole her from the farmyard down at Pam’s.” She paused, ” Are you mad?”

Was I mad? well, not really, though I wasn’t pleased that I was deliberately deceived by a bunch of children. Although I must say, I was a little impressed that they all stuck to their story- for years, in fact. And what’s more, they had first tried to persuade all the other mothers to take the kitten, with no success. But in the end, my daughter was confident she knew how to sucker me into it. And sucker me she did.

Tabitha is seven now, and we love her as much as we did the day that she came into the house tucked inside a child’s coat. She also makes appearances in my artwork from time to time, as below. 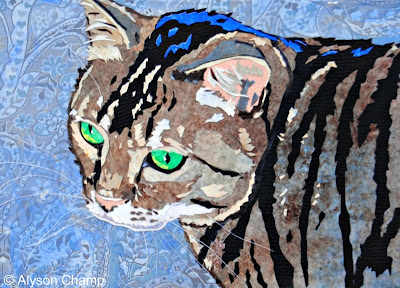