The Island of Misfit Art 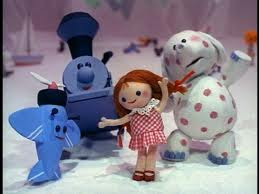 OK, so it’s not really an island. More of a lopsided pile.

On the floor of my upstairs studio there is a stack of unfinished paintings, all of them failures for one reason or another. Mostly they were flawed to begin with: bad colour choices, inherent (but initially not obvious) compositional flaws, or some stupid problem in perspective or anatomy that I couldn’t get right but that I thought would just magically resolve itself if only I kept painting. And sometimes, sometimes, just like kids from good homes who go careening off the rails and wind up in jail, perfectly decent paintings go bad for no apparent reason at all.

Once in a while I will completely give up on a picture and throw it out, but generally I am reluctant to part with my stack of failures. I have been known to hang on to them for years, hoping that my artistic skill will catch up with my artistic desire, or that I will be granted a little flash of creative brilliance and suddenly simply know how to fix something which has, up to that point, eluded me.

This week I felt inspired and adopted a misfit painting out of the stack. It is an oil I had started a year or so ago showing a scene from The Rolex Three Day Event at the Kentucky Horse Park. The reference photo came from a disc of photos sent to me by a fellow artist who had been lucky enough to attend the event. I had high hopes for this painting when I started it and was frustrated when it didn’t work out the first time. This time I figured I really had nothing to lose and decided to make a second attempt at finishing it. There were compositional issues to resolve and aerial perspective problems. It took two days to get it all sorted out. I’m sorry I didn’t think to photograph the before and after so you could also see the transformation. Below is the after. I think it worked out pretty well. 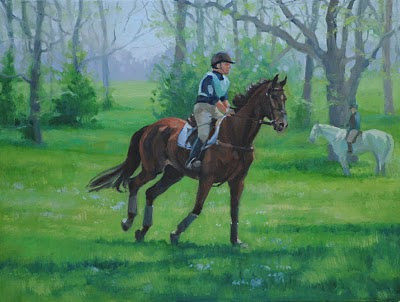 Spring Rider– 9×12 oil on panel ©2010 Alyson Champ
The next painting is the completed landscape from last week: A View of St. Chrysostome. I’m calling it finished, although it’s possible that there will still be some corrections to be made in the coming weeks. I need to look at it for a while first. 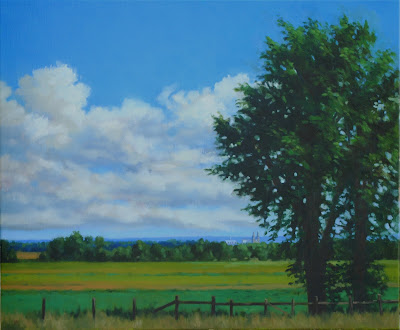